Man, I can't believe Fanime is just a week away.

For those who would like a shoot, here's my rates (discounted for those who still use LJ! LOL)

Time: 1 hour shoot
Days available: Saturday - Monday
Cost: $45 + $5 for each additional cosplayer. For groups, I can do discounts.

I still have slots available so let me know if you're interested.

And for something COMPLETELY different, I'm volunteering to help teach Argentine Tango during the dance classes at Fanime.

And of course the Black and White Ball is Sunday at 6:00pm-Midnight.

The ball is formal dress (but not necessarily black and white, just formal / dressy).

I will be there dancing Argentine Tango, Salsa, Swing/Lindy Hop, a little Nightclub Two-Step and whatever I can cobble together from Waltz, Rumba and Ballroom Tango. LOL

Man, if I was only cosplaying this year, I'd have a trifecta of things I'd be doing at Fanime! LOL

Man, watching this performance, it reminds me why I work so hard to learn Argentine Tango. Because I want to be able to dance like that! 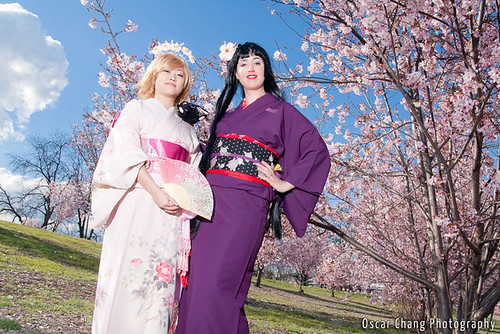 Thanks to everyone in LA for such a wonderful time this weekend!

I'll post Gallifrey One pics in a bit, but there's some from the Cherry Blossom gathering that happened this Presidents' Day.

Wow we were SO lucky that the day was gorgeous and the blossoms were in bloom, check out the photos! :> praedestinatio and I went to the Dicken's Fair we both got some glass pens. They look so cool and is really interesting. But hell, when do I even actually write something. You know, with a pen and paper?

But I went ahead and got it anyway! X-D

praedestinatio got a smaller one as well.

So the plan was that I was gonna finish my holiday cards with it, but sadly, the paper I used to print the holiday cards is pretty crappy. It looks ok when something is printed on it, but doesn't take to writing ink very well.

So will finish my holiday cards with a normal pen, but you should probably expect a letter from me in the future. X-D

Shantell wanted to do a holiday themed photo shoot and I think we have some really festive ones for the season! So I'm probably going to file this under, reason's why I'm still single... LOL Oh I'm sure there are a myriad of reasons, but I'm sure these aren't helping.

Anyway, I'm at the point in my Argentine Tango where the way I pivot (spin on the balls of my feet) is affecting my dancing. Especially with a partner. We were doing molinetes (where the man pivots on his foot, while his partner travels around him).

I was having problems doing it because I was overusing my hips when I turned. Part the reason was my shoes. So I finally broke down and got some dance shoes. They are from the brand Go Go Dance (not Gogo boots, thank goodness) from Ballroom Connection here in Sunnyvale. They are made of leather and have a felt sole for better sliding on dance floors.

Wow did it make a difference! I'm gonna need to get used to the new shoes, but yah, it made my pivots, ochos and a few other things much smoother! So the next day, I was gonna just drop in at Barns & Noble to grab a coffee and sit down to read after doing family portraits at the studio. But then I noticed they had the new NookColor eBook readers. I had read the Engadget review already and although I liked the design and the features, the fact that it still seemed slow and unpolished made me want to wait. Also the fact that it can only go for 8 hours (with wifi off) was a bit of a turn off. My Sony reader (which is b/w and uses eink) lasts for weeks without a charge.

However, after using it... wow, it's awesome! X-D I mean, it's no iPad of course, but it's also half the price of the iPad. The screen is absolutely gorgeous, glossy, but still very readable. The review was right, although responsive, it still has random slowdowns and just not as buttery smooth as the iPad or some of the high end Android phones out right now.

But the great screen for reading color content (manga of course) and the very usable web browser really did surprise me. Also it was the perfect size and weight. I found the iPad too big and heavy to be an ereader. For a tablet it's fantastic. So yah, I picked it up. LOL

I put on my copy of The Girl Who Kicked The Hornets Nest and started reading where I left off from my Sony reader. I also started rereading some manga I already had, High School of the Dead, Vulgar Ghost Daydream and xxxHolic. I mean they were fine on my Sony eink reader, but man they looked STUNNING on the NookColor. So much more detail and pixel density and of course the extra color art in HSotD was great!

Also, in the morning, I generally check a few web sites in bed, Twitter, Engadget, Gizmodo, Huffington Post. I usually don't use my laptop because that would mean getting out of bed. So I use my phone, which is just too small. The NookColor was the perfect size. X-D And since the browser is very usable (again still not as fast as the iPad or iPhone 4) it's way better then my Palm Pre screen size and speed wise.

The only down side so far has been that, it does read PDFs very well, but it can't bookmark them. Which is strange, so if I was reading a 200 page manga and went to read something else, it would lose it's place. :( Thankfully a quick way to fix that is to convert the PDF to EPUB, which I should do anyway to resize the manga pages to fit the high res screen.

The other thing is the battery, a full day of heavy use made the battery go to about 45%. So I can probably go 2-ish days between charges. Not bad. It also uses a standard microUSB plug, which makes it easy for me to charge it at home or at work.

The one thing I haven't tried yet was trying to read out in bright sunlight. I've been at work since getting the NookColor so I haven't *seen* bright sunlight yet. -_- But will give it a go when I can.

Overall, I've been super happy with the NookColor! I was telling a co-worker that I think that the NookColor being an ebook reader gave me a different expectation vs it being a "tablet." If I wanted a tablet, it would basically have to be the iPad or something just as good. IMHO all the current Android tablets (including the Samsung Galaxy Tab) aren't good enough yet.

But if it's an ereader, if it reads books, magazines and manga well, anything else, web browser games, etc as long as they are just OK, it's passible. If you want a "tablet" you do not want the NookColor. But if you want a decent color ebook reader that happens to have a web browser, Pandora and basic apps, I think you'd be pleased.

Thanks so much for everyone that donated! We actually went all the way up to $150!

That's awesome! Considering, I honestly thought I'd get maybe, $20-50 when I first started!

You can check out the Movember site to see pictures and how the donations added up.

Oh! And I was asked to have my photo used for a blog posting about Movember here on HalogenTV.com. Yay for token Asian! ;-)

I was going to shave this baby off ASAP because, it's gotten to the point where it's kinda itchy and distracting now. LOL But I will hang on for it for a little while for someone to take silly photos of me. -_-;;; Might as well get more documentation on this huh? LOL

But yah this was a ton of fun and I look forward to trying this out again next year!

http://www.oscarchang.com/
Yay! Updated my web site, it's all shiny and cool and stuff now. ;-)

Seriously though, I really do love the look and usability of the site. I think I was saying that it looks very Web 2.0 without being annoying or just being an ugly Adobe Flash site.

Please check it out, look around and pass it to anyone who's looking for a photographer. :D

For those who are curious, the site is now using a WordPress backend with the amazing DeepFocus theme, modified to fit my needs.

And if you still want to see the old site, it'll be up a little longer.

PS: My co-worker forwarded this to me, asking if this is what I was doing... LOL!

Remember, if you like what I'm doing (or just getting a good laugh out of it!), please donate to a good cause! :{)

Some photos from the Argentine Tango style Milonga that I attended. Loved the low lighting and people dancing. One of the reasons why I really wanted to learn it!